Katie graduated from Hope LHS in 2010. She now finished her church worker degree in May 2014. Katie's degree is in K-6 Elementary Education with a minor in Lutheran Confessionalism (LCT) from Concordia St. Paul, MN
She taught 1st and 2nd grade at St. Paul's Lutheran School in Fulda, MN for two years and now teaches 1st grade at Immanuel Silo north of Lewiston, MN.

Katie says:
"I am very thankful for my experience at Hope and all the support I have continued to receive. I am looking forward to this next step in my ministry in Christ." 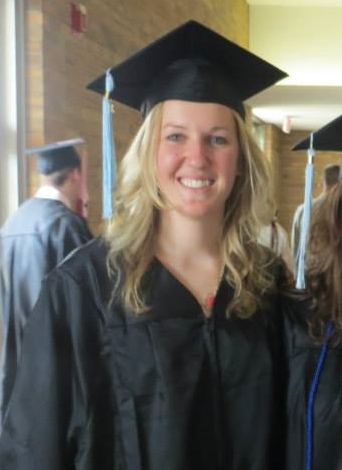 Christine Klug graduated from Hope LHS in 2010 with Honors. She graduated from Concordia University Wisconsin in Mequon. She has a degree in Early Childhood through Early Adolescence with a minor in social studies. She served in Modesto, Ca teaching a class of first-graders. She currently teaches 2nd grade at Immanuel Silo north of Lewiston, MN.
Christine says:
"My time at Concordia Wisconsin was such a blessing. Academically I felt very prepared by Hope's curriculum. Specifically in math and theology. While studying for my theology exams I was super thankful for the Christianity classes."

Christine says:
"My time at Concordia Wisconsin was such a blessing. Academically I felt very prepared by Hope's curriculum. Specifically in math and theology. While studying for my theology exams I was super thankful for the Christianity classes."


﻿
Christine says:
"My time at Concordia Wisconsin was such a blessing. Academically I felt very prepared by Hope's curriculum. Specifically in math and theology. While studying for my theology exams I was super thankful for the Christianity classes."

Josh Huffman, Alumni 2009 writes blog. Check it out!New post on Life of a SinnerTo Judge, or Not To Judgeby Joshua HuffmanIn today's day and age, nobody likes to be judged! We like to throw around the words and phrases, "Only God can judge me," "how can you judge me, when you have a log in your own eye," "judge not, and you will not be judged," and "he who is without sin, throw the first stone." We(as a society) absolutely hate being judged. But why? We're afraid that what we are being judged for defines our character, and we are to high and mighty to accept others pointing out our mistakes. Thankfully as a Christian, I don't have to worry about being defined by my mistakes. I am defined by the blood that was poured out on the cross for the forgiveness of my sins. I make mistakes all the time, and people most certainly notice my mistakes, but am I defined by them? Not a chance.

In the army, we take a lot of pride in our uniform and keeping it to the upmost standard. Someone, somewhere down the line decided that you can tell a lot about a man by his uniform. Because of that, you hear a lot of criticism by our peers and by our sergeants about how our uniform looks. They can get nit picky down to the smallest detail. It could be easy to ignore the criticism, especially from our peers because we don't think they are any better than us and have no place to correct us, especially when they correct us with a bad attitude, or in a way that you don't like. In the end, we have to look past the way they corrected us, and accept their words for what they are. Because when a superior notices that something about your uniform is messed up, he's not going to care why it's messed up, he's not going to care that someone told you to fix yourself in a way that bothered me, all he is going to care about is that your uniform is messed up, end of the line no excuses.

We have to learn to accept criticism, even if it is delivered to you in a way you don't like or hurts your feelings, because in the end, it is going to better you. Be thankful for it. I, personally, don't want to be standing before God with Him asking me, "Josh my son, why did you not correct this sin of yours, I even sent someone to warn you about your sin?" and me responding with, "Sorry Father, but I didn't like the way he told me I was wrong, it hurt my feelings." Repeat that again, but place in your name and a sin/wrong someone has tried to correct you on.

In the end, being judged is a blessing when other's call you out on your wrong. You're not defined by your wrong doing, you're defined by God. With others calling you out, you can be thankful that they've shown you the error of your way and you now have the opportunity to better yourself.

For what have I to do with judging others? Is it not those inside the church whom you are to judge? God judges those outside..

..God's kindness is meant to lead you to repentance.

Check out these verse's in the bible, read them in full context to see if you agree with me on this.

One of the reasons so many people are afraid of/stay away from religion is because they believe it is all about a set of rules you have to follow with incredibly high standards. We seem to teach the world that they have to give up everything that is fun, to follow God. We always seem so angry with the world. Why would anyone want to be a christian when we are so angry with the world and constantly bicker over God's Law over what is right and what is wrong. We've all become such a slave to the Law without understanding what the Law is even there for in the first place. We've therefore taught the world, that following God is about following His Law.

To many people know God as a set of rules you must follow.. But  He's so much better than that! He's an eternal spring of joy and peace! The 'rules' are more than rules, they are keys! Keys to opening the door of joy and life! Nobody realizes that giving up earthly things actually brings you more happiness and freedom than what earthly things can provide. It's a nice thought to think that God created the law to see how much you love Him by testing you with a set of rules. I used to believe that. But I've learned the God's law is so much greater than that! God created His law to keep you free from everything that take you in as a slave, to keep you away from the things that make you feel empty inside. His Law is freedom. Just think for yourself everything that the world says is so fun, but God's law says no to. Now think even deeper about why might God have said no. What is God protecting you from in each of His Laws?

When other's call you out on the error of your ways, consider it a blessing. But please me careful about who you judge. Judging those outside the Church is pointless, it leads to nowhere. Instead, show love to those outside the Church, show kindness. It is God's kindness that is meant to lead us to repentance. I can't tell you how many times in my own life where I would think about God's kindness and grace to me, and it would just lead me to repentance and inspire me to be closer to Him.

I've been blessed to be around an awesome college ministry. Something I have seen over and over again, is people will come check it out for whatever reason. They would have lots of ideas and lifestyles that you just couldn't agree with, but they weren't called out on for it. Instead they were shown love, God's grace, and kindness. Next thing you know, they would return, then start reading the bible on their own, then commit their life to Christ, and God would work in them and show them in His Word what they are doing wrong and they would begin to change their ways. But it all started with love. God calls us to love those outside the Church, just like He has loved us.

“If your brother sins against you, go and tell him his fault, between you and him alone. If he listens to you, you have gained your brother.  But if he does not listen, take one or two others along with you, that every charge may be established by the evidence of two or three witnesses.

When you are to judge, those inside the church, don't approach them like you are judging them to heaven or hell, show them in love and in private the error of their ways.

In the end, only God can truly judge you, but don't forget that He actually IS going to judge you. 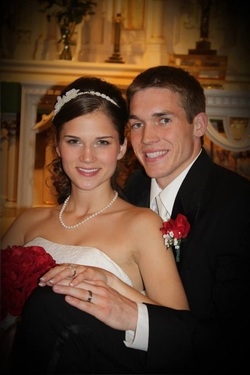 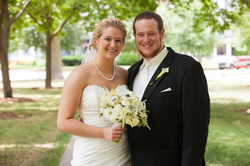 Thank you to Alumni Ted Schwerzler (08) for the donation of printing calculators for Accounting Class. Chris and Ashley (Welter) Harrison
Both are Graduates of Hope LHS
Chris 2009 and Ashley 2007
Both Employed at Merchants Bank, Winona, MN